Welcome to Connaught and Laurel!

Throughout Year 4, the children will be learning about diversity, equality, collaboration and respect through a broad range of topics, including:

Key concepts such as Social Responsibility, Justice, Gender Equality, Democracy, Environmental Care, Social Exclusion and Discrimination and Disability are built into everything we learn.

In Year 4 our children hone their critical thinking skills through topic work including the following literature;

To support our understanding of Homer's Iliad, we are learning the songs from Heroes of Troy; a sequence of learning which targets objectives from the Music curriculum at Key Stage 2. There are seven exciting songs to learn, each one linking to an episode of the story of the Trojan War.

Trip to the British Museum in London, on Thursday 5th December 2019!

Year 4 thoroughly enjoyed attending Troy: Myth and Reality this December. It is the British Museum's major exhibition for Autumn 2019, revealing the lasting legacy of stories and legends from the Trojan War. They were first talked about by the early ancient poets including Homer, in his epic work the Iliad. This trip will fully support our work in Literacy and Topic on Homer's Iliad and ancient Greek culture, history and society.

There were 300 objects and works of art on show which have been inspired by the tales of war, love and loss. Below is an overview of the exhibition. Please feel free to take a look and discuss with your children!

Our Year 4 children also had the opportunity to study and perform a movement piece of the Iliad.

Children will develop their confidence in performing arts and dance whilst deepening their understanding of story telling techniques.

Previous performances have been:

Learn more about our topics and books!

The Iliad is the oldest surviving work of Greek literature, written by Homer in the 8th century BC. It is an epic poem, with 24 chapters, based on the attack on Troy by the Mycenaeans. The poem includes early Greek myths and legends.

The Greek influence on the world (Topic - Autumn 2)

From artistry to politics, ancient Greece left a considerable impression on world history. Learn why Greek and Roman gods share so many similarities, how the alphabet got its name, and how the legacy of ancient Greece has evolved over thousands of years.

It was lovely to see so many children had gained the Year 3 badges and were wearing them on their jumpers coming up to Year 4. We are proud to say that even more children have gained their Year 4 Bronze badges and are now working towards Silver. Badges are earnt by following our School Aims and our Keys to Success. 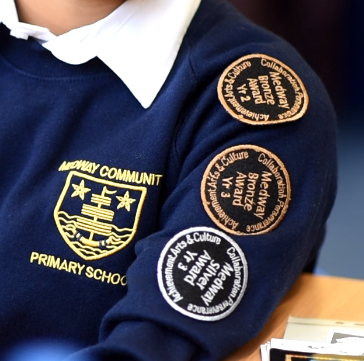 PE is every Tuesday afternoon and children should bring their PE kit in a bag. Earrings and other jewellery should not be worn on that day.

In Y5 children will have the opportunity to go swimming.

Moonshine, Sunshine and Year 6 children are having their height & weight checked by the School Nurse on 23rd January 2020. Letters have already been sent out
Top
Cookie information
Cookie Notice